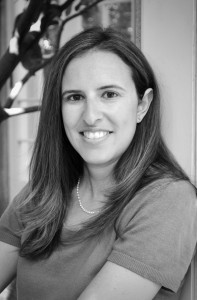 Dr. Cassandra Good is assistant professor of history, as well as associate editor of the Papers of James Monroe, at the University of Mary Washington. Her first monograph, Founding Friendships: Friendships Between Men and Women in America’s Founding Era, 1780-1830 (Oxford University Press, 2015), won the 2016 Organization of American Historians Mary Jurich Nickliss Prize in U.S. Women’s and/or Gender History. She also served as assistant editor for The Papers of James Monroe, Volume 5: 1803-1811, ed. Daniel Preston (ABC-Clio: September 2014).
What was the genesis of Founding Friendships?

I came to this project from sources that came up in my undergraduate thesis research over a decade ago.  I was writing about etiquette and politics in early Washington, DC, and read a letter Margaret Bayard Smith wrote about her relationship with Thomas Jefferson.  I was surprised to find that she shared a close, loving friendship with a man–and started to realize that I had seen a number of such friendships in my sources.  The questions this raised and they way they intersected with contemporary debates about male/female friendships stayed with me, and I knew when I started graduate school that this would be my dissertation topic.

When did you first attend SHEAR? Did your SHEAR experience help you with Founding Friendships?

I attended SHEAR for the first time in 2009, when it was in Springfield, Illinois.  I presented a paper on friendships between men and women in the political elite, which was my first year seminar paper in graduate school.  I presented another portion of the project in 2012 in Baltimore.  Through both of these panels I met other scholars working on similar projects.  I have met so many great people at SHEAR’s annual conferences over the years that helped me develop the arguments in the book as well as feel part of a larger scholarly community.

My Jacksonian American students read your book in the spring semester and loved it. Besides winning their admiration (and the Nickliss Prize, of course!), what kind of positive responses have you received about Founding Friendships?

It’s been really fun to hear from non-historians after I give a book talk or after they’ve read the book.  Many people want to share stories of their own friendships with the opposite sex and the challenges they’ve faced in those relationships.  My favorite response, though, came from a colleague who told me that his student read my book and she said that it made her want to be friends with me!  I hope all of this means I succeeded in my goal of making history and gender theory accessible and easy to relate to.

In addition to being the author of an award-winning book, you are also an associate editor at the Papers of James Monroe. How did you get involved in documentary editing?

I was actually doing documentary editing before I realized what that was!  During an internship at the local historical society in high school, I was asked to transcribe a woman’s 19th century diaries.  I became fascinated by her and ended up doing an exhibit comparing her diaries with her husband’s (both kept around a dozen volumes) for my high school senior project.  I also published an article many years ago with transcriptions from Margaret Bayard Smith’s commonplace books.  It wasn’t until I got to the Monroe Papers, though, that I was formally trained in documentary editing.  There’s so much more work that goes into producing the edited volumes that historians all rely on for our research than I had ever realized.

What is the focus of your next book?

My next project is on George Washington’s descendants and their political role in the new nation.  It will be a family biography using manuscripts, houses, and material objects to examine how the nieces, nephews, and step-grandchildren he helped raise constructed their public image.  I wrote about several of these individuals in Founding Friendships and started to wonder what happened to the family as a whole, particularly given republican fears of power descending through families.  The approach of studying relationships and politics will be the same as in my earlier work, but this will be in the form of a narrative and go further into the 19th century.

Read more about Dr. Good and her research at her website. She also has written extensively for the Smithsonian.