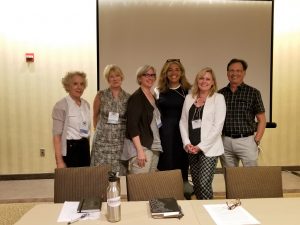 Now that I am back from a very exciting SHEAR weekend, I have been reviewing my notes and processing all of the ideas that percolated during three days of panels. Not only do I have great suggestions for my own work, but I am inspired by other projects and methods I observed over the weekend.

While I enjoyed all of the panels I attended, one in particular grabbed my attention. Panel 20: The Art of History in an Age of Revolution was fantastic. Gwendolyn DuBois Shaw presided over a panel that included Zara Anishanslin (University of Delaware), Jane Kamensky (Harvard University), Cathy Kelly (University of Oklahoma and the Journal of the Early Republic), and Paul Staiti (Mt. Holyoke College). Ann Fabian (Rutgers University) provided an insightful comment at the end.

Yet this was no ordinary panel, it was really more of a roundtable. Each participant shared a piece of art, or a few, from their work and then explained how they use it to unlock a story or approach to history. Anishanslin shared a portrait of Anne Shippen Willing. She explained how she used the portrait to create an imagined community between the subject (Willing), the painter (Robert Feke), the weaver of the silk (Simon Julins), and the artist behind the silk design (Anna Garthwaite). By exploring these individuals, she was able to reveal deep connections between various communities in the eighteenth century Atlantic World. Jane Kamensky showed a portrait of John Singleton Copley and told the story of his life in the middle—the middle of communities, the middle of families, and the middle of empires. Paul Staiti showed a portrait of George Washington and compared many of its features to a famous portrait of King George III. These pictures replaced the images that defined the British Empire and suggested what a republic should look like. Cathy Kelly ended by exploring a republic created from taste by also showing a series of portraits. Kelly argued that “taste” told Americans where to look, how to view things around them, and to read text. For example, a portrait of George Washington guided citizens how to shape their identity and replicate his greatness.

After the short presentations Ann Fabian asked a few questions to start the conversation. How do visuals differ depending on what artist or figure we consider? When analyzing an image and its historical significance, how do you get from looking and seeing to fighting and working? Who and what do visuals leave out? Given the deluge of image in today’s society, are students good interpreters of visuals? How have they surprised you with their interpretations?

The conversation with the audience largely centered around how to use visuals in the classroom and why more historians need to engage with visuals (and do so more effectively). The discussion was riveting and I encourage you reach out to the panels for their thoughts and read the tweets on the panel by many of the audience members. (See #PN20 on Twitter). I also storified my live tweets from this panel.

As an audience member, I had some observations about why this panel was so compelling. This panel was the last of a long day of sessions and stood in between the audience and cocktails. Yet, the audience was captivated, so clearly the panelists did a few things right. I have four take-aways for future panels.

There has been much discussion in SHEAR and other organizations about how to liven up conferences and move away from the paper presentation format. This panel demonstrated one option for alternative formats that although difficult to recreate, can be wildly successful when done right.

Lindsay M. Chervinsky is a postdoctoral fellow at the Center for Presidential History at Southern Methodist University. She received her Ph.D. from the University of California, Davis in January 2017 and is currently working on her manuscript titled “The President’s Cabinet: George Washington and the Creation of an American Institution.”

As in the past, The Historical Society of Pennsylvania will open early (10am) on the Thursday of SHEAR, July 20.  On both Thursday and Friday, library admission will be free to registered conference attendees; please show a conference badge or registration confirmation along with a photo ID when you sign in. (General admission is always free for students with ID, and $8.00 for others.)

If you haven’t been to HSP within the last five years, you’ll need to fill out a new registration form; you can download and print the form here to fill out ahead of time if you wish.

HSP has scheduled extra staff for paging but wait times may be longer than usual due to a high volume of researchers.

For attendees who use Twitter during the annual meeting this week, we recommend using the official conference hashtag #SHEAR17 to make conversations easy to follow.

In addition, if you tweet about an individual session, we recommend adding a second hashtag in the form #PN[number]. Tweets about, e.g., Panel 53, “The Public Language of Class in America,” should end in the hashtags #SHEAR17 #PN53. Using both tags will make it easier for other users to follow and engage in the conversation.

Please also remember to respect panelists’ wishes regarding social media broadcasting. If they or the session chair ask that a presentation not be shared on social media, please respect their request.

Dear SHEARites, it’s less than a week until our 39th annual meeting opens in Philadelphia and I have a few updates and reminders to share with you.

I send you traveling mercies and look forward to seeing you in Philadelphia next week. If you need anything before then, please e:mail me at robyn.davis@millersville.edu.

If you are planning to attend SHEAR’s annual meeting in Philadelphia later this month, remember that pre-registration closes this Friday, July 7. Please also note that on-site registration is possible, but you must pay with cash or check (no credit cards), and there is an additional $30 fee as well.